Investment casting offers incredible design freedom, but the design must make best use of its benefits to be cost effective.

The investment casting process (also sometimes referred to as the lost wax process) has been used for thousands of years. In its earliest form, the process made art objects and jewelry. Today, investment cast parts can also be found in automotive, air and space craft, dental and machinery applications, and sports equipment. 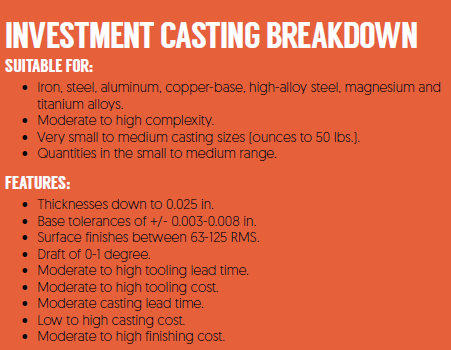 The process offers an engineer more design freedom than other methods of metal forming because of its near net-shape advantages and wide range of available alloys. Designers also do not have the same concern for parting lines and draft as they do with other casting processes. Nearly any configuration can be cast via this method, although it is not always economical.

In the case of the pump casting with the 12 interconnected internal passageways, instead of multiple pieces with less-complex geometries assembled together, this one-piece casting saved weight and eliminated future failure points at the assembly location. The combination of thin walls in certain areas, large masses of metal in others, and the grade B metallurgical requirements make this casting a challenge, something ideally suited for investment casting. Produced by AFS Corporate Member O’Fallon Casting (O’Fallon, Missouri), the pump housing conversion weighs 9.6 lbs.

In general, the per unit cost for an investment cast part is high compared to other metal forming methods. But when designed correctly, the part’s value will also be high because it reduces the number of components necessary in a single unit and eliminates secondary operations such as machining. If the decision has been made to convert a component or assembly to investment casting, the original design should be shelved so a new design engineered specifically for the process can take full advantage of its benefits.

For example, a stator housing for a commercial aerospace application was originally produced as a two-piece hog-out with a pressed-in insert. Redesigning it as a one-piece investment casting reduced the total cost by 17-20% from previous designs. How? The casting—produced by AFS Corporate Member Carley Foundry (Blaine, Minnesota)—incorporates a cast-in steel insert, extensive external mounting features, precision aerodynamic start vanes, a motor case with ventilation holes, a bearing liner, an integrated fan impeller ring, and mounting brackets that support the installation into the aircraft. 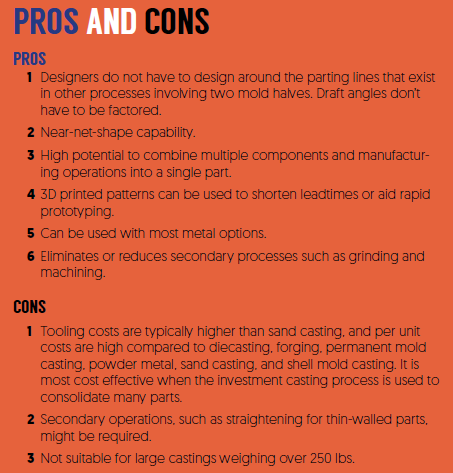 The basics of investment casting begin with the production of wax replicas of the desired casting. These replicas, called patterns, are formed by injecting liquid wax into metal dies. A pattern must be manufactured for each cast part produced. Next, the patterns are attached to a central sprue, also made of wax to form an assembly (or tree). The assembly is dipped into a solution that cleans the wax and then immersed into a liquid ceramic slurry that covers the wax. Next, it is coated with fine sand to form a shell around the assembly. This process is repeated several times. Each layer of ceramic is allowed to dry before another layer is added.

This shell must be strong enough to withstand the subsequent steps of the investment casting process.

Once a sufficient shell is built and completely dry, the assembly is placed in an autoclave oven that melts out the wax pattern and sprue, leaving a hollow void in the shell. Then, molten metal is poured into the shell and left to solidify before the shell is removed and the castings retrieved.

The investment casting industry was an early adopter of 3D printing technology, which is used to print the patterns directly without the need of tooling. This has made it a prime option for prototype parts, along with its ability to cast a wide range of alloys. In the case of a unique wheel design for a Volkswagen showcase vehicle introduced last year, investment casting allowed the customer to achieve an audience pleasing design while also beating a short deadline. The wheel highlights a new engineering method called generative design that uses software to calculate and produce multiple designs quickly based on factors such as material requirements, cost, and sales volume.

The VW bus is a combination of old and new technologies, and the investment cast wheel reflects that in its use of 3D printed patterns married with a manufacturing process that is over 4,000 years old.

Click here to see this story as it appears in the January/February 2020 issue of Casting Source.