Buyers and designers of castings traveled to Atlanta to visit with dozens of potential new casting sources during CastExpo 2019.

More than 5,300 metalcasters, end-users, researchers, equipment suppliers, and students convened at CastExpo 2019 in Atlanta April 27-30 to advance the industry and strengthen the manufacturing supply chain.

During the four-day show, visitors walked a show floor packed with more 420 exhibitors, listened to keynote speakers, celebrated the achievements of their peers, and established relationships that will continue to pay dividends in the years to come.

End-users and buyers of castings came to CastExpo to meet with more than 40 foundries exhibiting in the Cast in North America section of the show floor, as well as sit in on 11 educational sessions discussing topics specific to designing and sourcing metal casting.

Beyond the busy show floor, other highlights from CastExpo include riveting keynote presentations from Kaihan Krippendorff and Frank Abagnale Jr.

Founder of Outthinker Roundtables, Krippendorff delivered the keynote address, “Outthink the Competition.” During his presentation, Krippendorff spoke about thriving in today’s era of fast-paced technological change.

“I want (the audience) to get that when you’re in an industry that’s been around for a long time, it creates great opportunities to think differently and open up possibilities,” Krippendorff said.

How can audience members do that when they return to their offices? During his presentation, Krippendorff went a few questions, including: What’s the future, and what can we do now to prepare for the future? And what is uncoordinated that you can coordinate?

“I think if you get your team together, spend seven minutes on each of those questions, let them generate lots of ideas, you’ll be on the path to something really exciting,” he said.

Abagnale, one of America’s most notorious con men, described his escapades and talked about how he learned to live on the right side of the law. Abagnale was made famous with the biographical movie “Catch Me If You Can” starring Tom Hanks and Leonardo DiCaprio.

Abagnale knows people are fascinated by what he did 50 years ago, and how he pulled off his schemes. But instead of just ending there, a contrite Abagnale used that tale to capture the imagination and attention of his audience, eventually bringing them full-circle to his core message: the importance of family and being there for your closest loved ones.

“It’s amazing to me where my life went after that, and it goes to show that only in America can you make mistakes and get up, brush yourself off and start over again,” Abagnale said. “You always have that opportunity if you want to change your life.”

Abagnale’s speech impressed Daniel Engling of Keramida. Engling appreciated how Abagnale didn’t focus on the glamorous parts of his story, but the important values he learned along the way “even when it made him fess up and face the negative effects of what he did.”

CastExpo is put on every three years by the American Foundry Society and held in conjunction with the annual session-based Metalcasting Congress with presentations focused on technical and management topics, revealing new developments in research and application as well as sharing best practices for running foundry operations. This was capped with the Hoyt Memorial Lecture given by Dr. Doru Stefanescu.

Stefanescu’s speech, “The Meritocratic Ascendance of Cast Iron from Magic to Virtual Cast Iron,” traced the history of the metal and outlined ways it can remain relevant for the future. And it was clear Stefanescu relished the chance to deliver his speech on a topic that is central to his career.

“It’s a lecture where the invited speaker has a chance to give his thoughts on a number of issues affecting metalcasting, but not exactly technical,” Stefanescu said. “That’s what makes it special.”

Stefanescu is faculty emeritus at Ohio State University and University of Alabama.

Along with the technical and management education sessions, Congress attendees had the opportunity to attend two Institute mini-courses at CastExpo: Metalcasting Process Basics and the new Training Best Practices Workshop. This workshop, taught by AFS Vice President of Education and Workforce Development Clarence Trowbridge, provided operations and training leaders with tools and templates to support training efforts at their facilities.

Richards Presented With Gold Medal
The American Foundry Society’s highest honor, the Gold Medal, was presented to Von L. Richards during the Annual Banquet on Sunday, April 28. A professor emeritus of materials science at Missouri University of Science and Technology (Rolla, Missouri), Richards received the 2019 Thomas W. Pangborn Gold Medal for his outstanding contributions in education, sharing knowledge broadly within the industry, and attracting new people to metalcasting.

When he was asked to reflect on his career accomplishments, Richards talked about his emotions walking the CastExpo show floor. Everywhere he turned, he saw former students working in important industry and academic roles and keeping metalcasting on a positive trajectory.

“That’s really great,” Richards said. “If I not only contributed to the industry, but also to the furtherance of the industry with the new academics that are involved in the industry.”

“The award is very significant to me. It indicates a capstone to a worthwhile life of helping young people to develop into their careers, something I always wanted to do,” Richards said. “I’m one of the fortunate people who actually got to do what they wanted to do, and I thank the foundry industry for that.” 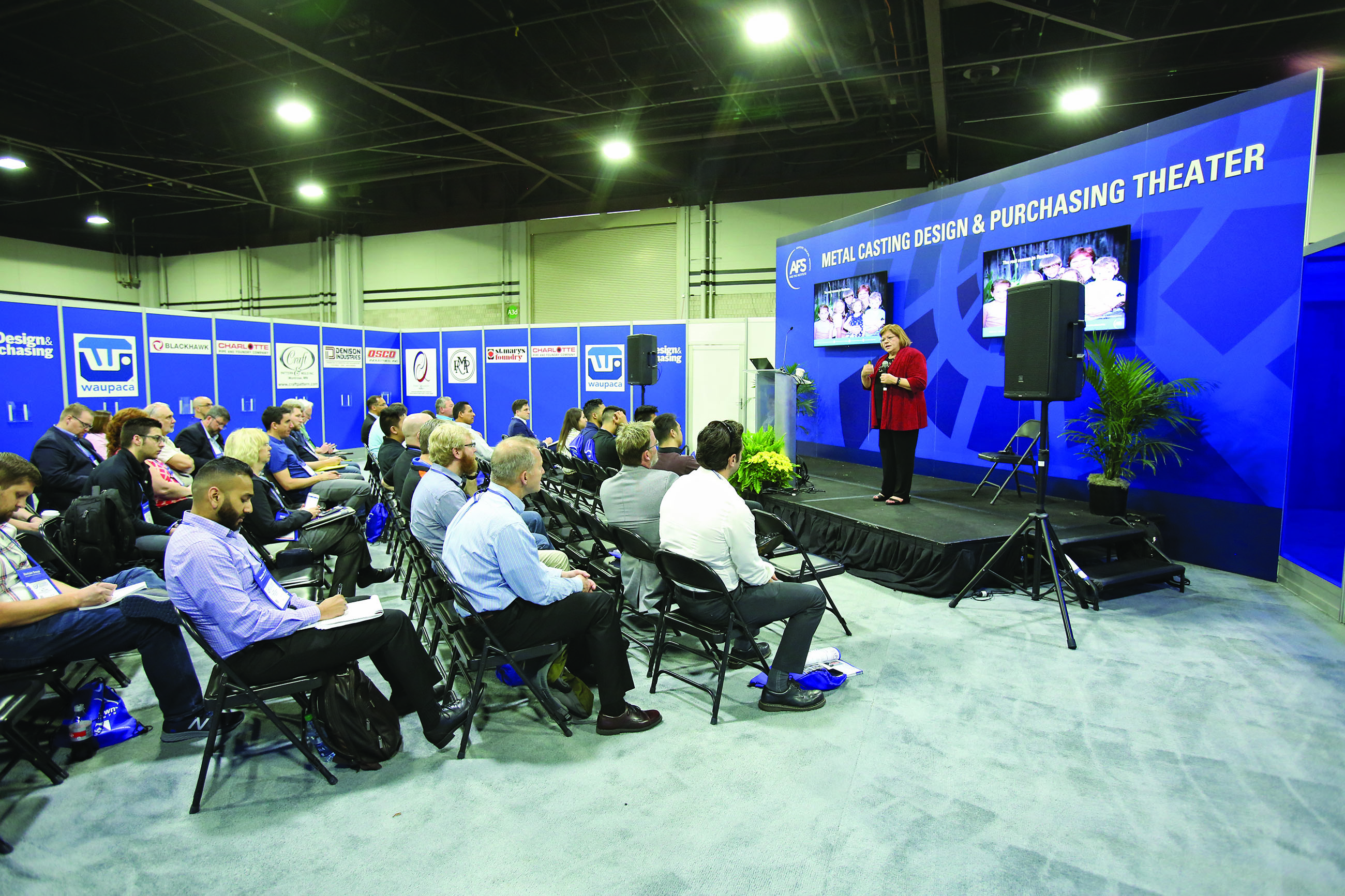 Honor Roll
Several other honors were passed out during the 123rd Metalcasting Congress. The AFS Award of Scientific Merit was presented to John M. Tartaglia, engineering manager at Element Materials Technology (Wixom, Michigan). This award recognizes Tartaglia’s outstanding technical papers and presentations, as well as meritorious technical contributions in the areas of material property information and fatigue strain analysis of cast metals.

Kokos is global technical team manager at Caterpillar Mapleton Foundry (Mapleton, Illinois). His service citation is for important work in advancing the technical understanding of iron casting and his support of advanced research, as well as his extensive service to the Cast Iron Division and his regional AFS chapter.

Satre is manager of corporate engineering at Allied Mineral Products Inc. (Columbus, Ohio). His service citation recognizes his steady leadership of AFS technical programs, outstanding service to the Melting Methods & Materials Division, and service to the industry as a rich source of technical information.

Smith is a casting consultant in Saginaw, Michigan. His service citation is for his relentless focus on attracting youth to the metalcasting industry through Foundry-in-a-Box and other outreach activities, as well as his longtime service to AFS regional chapters.

AFS Service Citations and the AFS Award of Scientific Merit were presented at the President’s Luncheon and Annual Business Meeting on Tuesday, April 30.
Division honors were given during the Division Recognition Luncheon on Sunday, April 28. Richard Gundlach, Element Materials Technology (Wixom, Michigan), was presented the Howard F. Taylor Award for his paper, “Influence of Mn & S on the Microstructure of Cast Iron (18-091).”  This award is presented to the author of the 2018 technical paper with the longest-lasting impact on the metalcasting industry.

Thomas Mueller, Mueller Additive Manufacturing Solutions (New Berlin, Wisconsin), was presented the Ray H. Witt Award for his paper, “What Impact Will 3D Metal Printing Have on Investment Casting? (18-109).” This award was established to recognize the authors of an AFS management or marketing-oriented paper that exhibits the greatest probability of favorably impacting the metalcasting industry.

AFS Corporate Contribution Awards were presented to Carley Foundry Inc. (Blaine, Minnesota) and Elkem (Pittsburgh).  This award recognizes companies that contribute a significant amount of their employees’ time and resources back to AFS through involvement in the division structure, the Institute and local chapters. 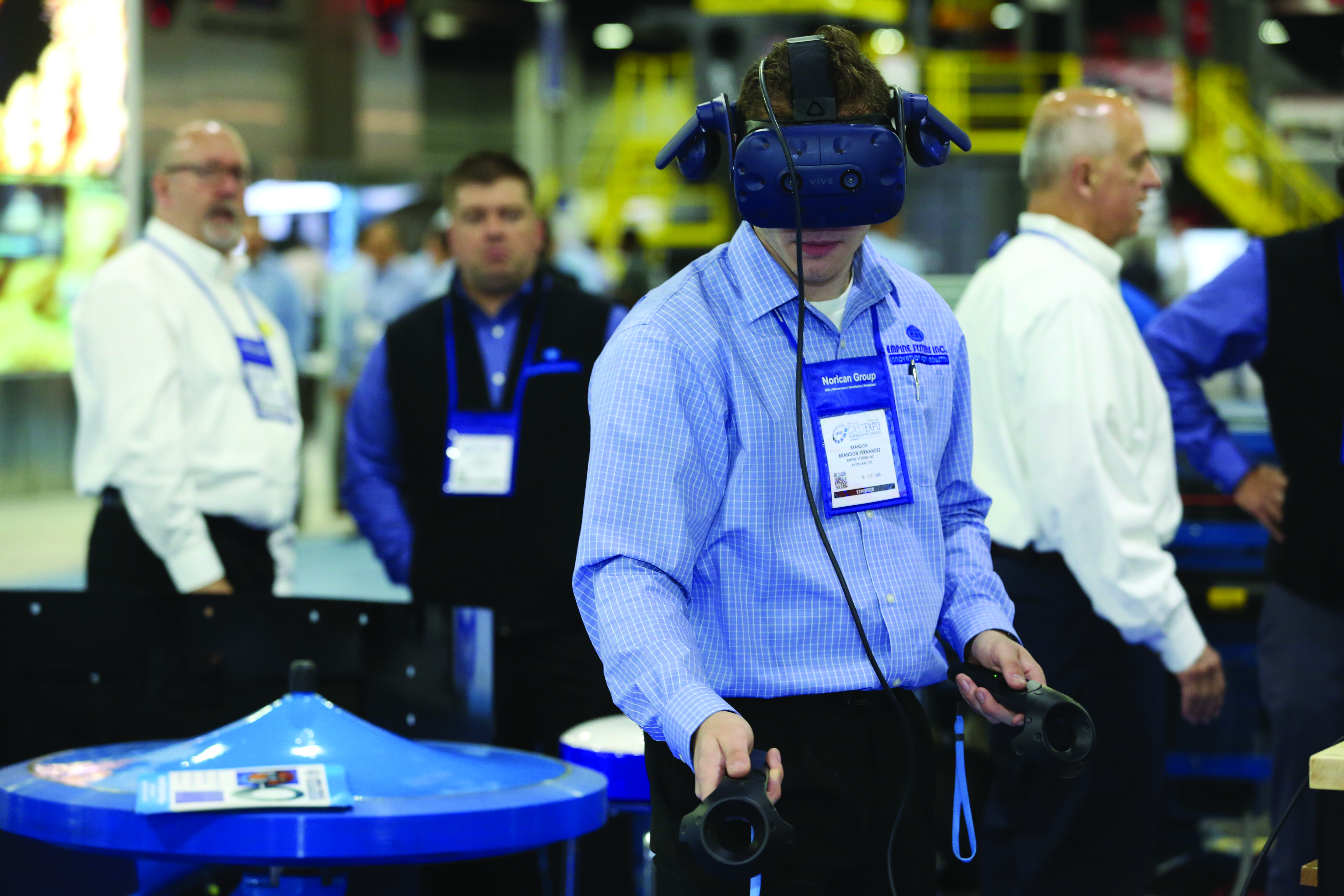 he AFS Millionaires Safety Award, which recognizes AFS Corporate Members for achieving a million or more safe-hours worked without incurring a lost time injury or illness during the calendar year, were presented to:

“CastExpo 2019 was very well-received by all of our various audiences, and we were thrilled to have more than 5,000 guests from 32 countries in attendance,” said Doug Kurkul, CEO of AFS.

The success of the show displayed the strength of the industry, and the variety of everything available to all parts of the supply chain.

“There is so much new technology that is available for foundries to evaluate and upgrade their plants. It was on display here,” Kurkul said. “Then, with the technical and management sessions, a wealth of knowledge has been shared. We’ve received tremendous feedback from the attendees that this was a very worthwhile 3 1/2 days in Atlanta.”

Click here to see this story as it appears in the May/June 2019 issue of MCDP.