The conversion of the compact utility tractor component from an 11-piece steel weldment to a single ductile iron casting was the result of a collaboration between companies with different backgrounds but common goals.

AFS Corporate Member Neenah Foundry (Neenah, Wisconsin) and Amerequip Corporation (Kiel, Wisconsin) worked together on converting an 11-piece steel weldment into a single ductile iron casting. The new swing frame, which is used on a compact utility tractor backhoe attachment, was the result of collaboration of the two Wisconsin-based companies and resulted in an improvement of quality and efficiency.

Not only did this casting bring a new customer to Neenah Foundry, it also brought Neenah the 2019 Casting of the Year award from the American Foundry Society and Metal Casting Design & Purchasing Magazine. Neenah was recognized for introducing a customer to the benefits of casting and converting a weldment into a cast component. The switch also helps Amerequip produce the part in a more efficient and cost-effective manner as it ramps up volume.

“This is a good example of time saved in production that a casting can bring,” one judge wrote.

Awards and honors aside, the casting was the result of almost a year of collaboration between the two companies. And although they have some common links (Amerequip vice president of sales and engineering Timothy Dorn had worked in the foundry business), the two facilities are quite different. Neenah produces gray and ductile iron castings for both the municipal and industrial sectors. Amerequip is a custom equipment manufacturer focused on laser cutting, welding, machining and assembly of steel components.

“There was a lot of learning on their end,” Neenah design engineer Chris Slinger said. “They were asking us for input as far as casting tolerances and porosity and draft. There was a lot of teaching that went along with working on this project.”

That challenge, along with a number of others, were overcome.

Perfecting the Design
In April 2018, Amerequip and Neenah had several face-to face meetings regarding the project. Specifically, Amerequip had begun to evaluate the 11-piece laser-cut, welded-assembly part and determined it could benefit from a change in process.

Dorn and Amerequip saw where production volumes were trending for the component, and since they knew that other similar applications were being cast, it “just started to make sense” to pursue a conversion.

“We anticipated it was going to help us with production efficiencies and meeting our on-time delivery metrics,” Dorn said. “We’re getting a finished product as a casting, as opposed to a multiple-piece weldment needing to be fabricated. All around, we felt we were going to see some nice advantages.”

Before those advantages were realized, work had to be done.

Both Neenah Foundry and Amerequip performed finite element analysis (FEA) to ensure the casting would meet strength requirements. This allowed Neenah to quickly see where it could eliminate material, which led to a weight reduction of 5.6 lbs., including machining. There was no hesitation in sharing models and screenshots during the design stage, which made the process go smoothly.

“It was a matter of doing the engineering ahead of time, so we’d have a better casting right out of the gate,” Slinger said. 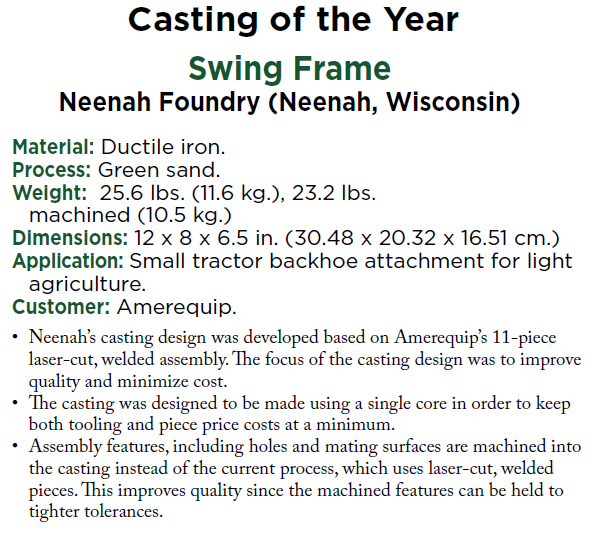 Neenah used Amerequip’s provided FEA and compared it to their own. That created a baseline so Neenah could set its constraints properly.

“There were some issues with the setup initially, which caused discrepancies in the location and severity of the stress concentrations,” said Scott Plosczynski, director of engineering at Neenah Foundry. “We were able to correct those issues by adjusting the constraints in the analysis.”

The part was designed to be manufactured with a single core, which helped to keep tooling and price-per-piece at a minimum. Assembly features, including holes and mating features, are now machined into the casting instead of the previous process of laser cutting and welding. The machined features can be held to tighter tolerances and provide a more accurate assembly.

“Looking at the weldment, there was a lot of excess material on the plates which was required for the purpose of welding the components together,” Slinger said. “Whereas with a casting, you’re able to simplify the design and eliminate the extra material.”

Slinger and the team at Neenah Foundry said it took “several iterations” and around 10 different tweaks before they completed the design. Once the final design was approved, Amerequip required fully machined prototype castings within a short timeframe. In order to expedite the process, Neenah used 3D printed cores, which eliminated the cost and time associated with building a core box. It also allowed flexibility to change parts of the design after testing, if required. Neenah also was able to print gypsum-based 3D models of the casting itself, which were used to build the fixtures for machining.

After final testing by Amerequip this summer, the swing frame is planned to be used on the final product in 2020.

“We ran through several iterations of the FEA analysis looking for hotspots based on its application,” Dorn said. “Its application is something we are extremely familiar with, since we have been doing it since the 60s. We understand the stresses that would be applied to this casting. Running through the FEA analysis and getting the good results we were getting, we feel very comfortable with it.”

Different Languages, Same Goals
Becoming comfortable with the end result came only after Neenah and Amerequip were comfortable with the background of their business partner. Although this required some learning on both sides, it was aided by the positive and productive communication everybody shared.

“We kept a really good line of communication open between us. There wasn’t a huge delay between asking a question and getting an answer,” said Tom Marlborough, national account manager at Neenah. “We weren’t waiting long periods of time for responses. We were able to bounce ideas off of each other and get over any hurdles quickly.”

One practical hurdle for Amerequip was figuring out the difference between dimensioning a weldment print and dimensioning a casting model. But again, this was aided by the collaboration with Neenah and their willingness to walk Amerequip through anything that might have been lost in translation. Work with Amerequip senior project engineer Terry Schwalenberg and his ability to guide Neenah where necessary was also crucial.

Neenah Foundry was eager to assist a customer who was not very familiar with castings. Although Amerequip’s unfamiliarity led to some challenges, it also allowed for a clean slate that brought a free exchange of ideas.

“In this case, it was probably easier because they were very flexible. They looked to us,” Slinger said. “They listened to us for our recommendations and relied on our expertise in regard to capabilities. They were very good to work with and that helped out a lot. It allowed us to do our job and create a casting that would work for them.”

Dorn, who had previously worked for Neenah Foundry and Applied Process, also knew what to expect from Neenah, although many of his colleagues in engineering and design did not. They had to become comfortable with castings, its specific nuances and its language.

Neenah took the time to make sure Amerequip was secure with the foundry process, and even held a Foundry 101 class for its partner.

“To gain knowledge about what it takes to make a casting and working the design around some of those limitations, and understanding different foundry processes, for us that was the biggest challenge,” Dorn said. “Getting us up to speed to what a casting can do (was important), and in that whole process, Neenah did a fantastic job in helping us.”

Plosczynski was effusive in his praise of everybody involved with the project.

“The success of this project was not only due to the efforts of the engineering team at Neenah Foundry, but also due to the hard work of the employees in the foundry,” he said. “Without their knowledge and expertise, the concepts would never become castings.”

Click here to see this story as it appears in the May/June 2019 issue of MCDP.